Oladeji Bolarinwa, is the Managing Director of Inside OAU Innovations and The Trybe City Technology LTD.

Oladeji Bolarinwa began his life in the Mega City, Lagos. He is the last born of his family and has 2 siblings. He was born on a rainy night on the 13th day of September at Solomade Estate, Ikorodu, Lagos State, to the Family of Mr and Mrs Oladeji.

He attended Marvelous Nursery school for his Kindergarten education. Moving on, he had both his Nursery and Primary school education at The Brooks Montessori School, Odogunyan, Lagos State. At secondary level, he attended one of the Oldest and Prestigious Nigerian schools, Baptist Academy (BAPTACAD) founded 1855, at Obanikoro, Lagos State, Nigeria. At Baptist Academy, he was God-fearing and also, diplayed good leadership skills which earned him the Chapel Prefect position.

Bola is an intelligent young man, with sound analytic, reasoning and communication skills. Bola after gaining admission into the prestigious Obafemi Awolowo University has been making waves ever since. He has been a brand ambassador and brand influencer for WOLEMUSIC a gadgets brand, The Choice Concepts a Clothing and printing brand, Sleek and Silhouette Salon, a unisex salon, Inside OAU Innovations and The Trybe City Technology LTD, in which he also served in many other capacities.

He discovered his talent for writing back in secondary from short poems, in which he got so many positive reactions from his colleagues and his networks on Social media. Today, he’s a certified freelance writer and also, writes content for one of the biggest campus brands not only in Nigeria but Africa, The Trybe City Technology LTD. A brand to which he actively contributed to its development from the scratch. He’s also a Shareholder at Trybe City Technology LTD.

Bola also served in many capacities in his department at Obafemi Awolowo University. He has served as an editor and production manager for his department’s editorial board, NAPS exclusive. He served as the Chief Whip in the Students Representative Council, NAPSRC. He also served as the General Secretary in the Constitutional Review Committee that has successfully reviewed the department association constitution after 5 years.

Bola is also a sportsman. He is the coach of his class team, a team that is unbeaten in all matches for 2 years. He also served as NAPS(National Association of Philosophy students) Director of Sports and Assistant Coach for his department’s football team.

In his leisure time, he loves writing copies and poems, watching football, especially, FC Barcelona matches and he loves watching movies. Bolarinwa is also a person that studies very hard not minding his involvement in so many extra-curricular activities. 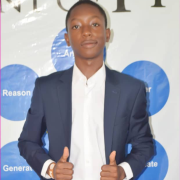 Oladeji Bolarinwa is a prolific creative writer✍️, Content developer, Journalist, Editor, Brand influencer and a Director at Trybe City🧡. At his leisure time, he prefers to write and watch movies. He's a Barca FC supporter 💯. His favorite quote, "it's never over until it's over, keep fighting"💪.